Every VM has 4 block devices connected:

This is mounted as /rw and here is placed all VM private data. This includes:

As the kernel is chosen in dom0, there must be some way to provide matching kernel modules to VM. Qubes kernel directory consists of 3 files:

Normally kernel “package” is common for many VMs (can be set using qvm-prefs). One of them can be set as default (qvm-set-default-kernel) to simplify kernel updates (by default all VMs use the default kernel). All installed kernels are placed in /var/lib/qubes/vm-kernels as separate subdirs. In this case, modules.img is attached to the VM as R/O device.

There is a special case when the VM can have a custom kernel – when it is updateable (StandaloneVM or TemplateVM) and the kernel is set to “none” (by qvm-prefs). In this case the VM uses the kernel from the “kernels” VM subdir and modules.img is attached as R/W device. FIXME: “none” should be renamed to “custom”.

TemplateVM has a shared root.img across all AppVMs that are based on it. This mechanism has some advantages over a simple common device connected to multiple VMs:

There are two layers of the device-mapper snapshot device; the first one enables modifying root.img without stopping the AppVMs and the second one, which is contained in the AppVM, enables temporal modifications to its filesystem. These modifications will be discarded after a restart of the AppVM. 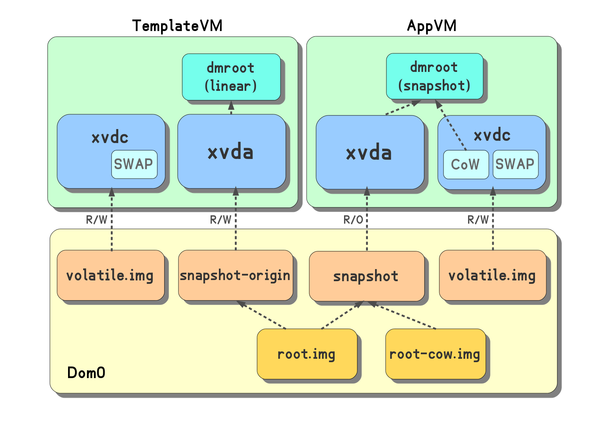 This device consists of:

The above is achieved through creating device-mapper snapshots for each version of root.img. When an AppVM is started, a xen hotplug script (/etc/xen/scripts/block-snapshot) reads the inode numbers of root.img and root-cow.img; these numbers are used as the snapshot device’s name. When a device with the same name exists the new AppVM will use it – therefore, AppVMs based on the same version of root.img will use the same device. Of course, the device-mapper cannot use the files directly – it must be connected through /dev/loop*. The same mechanism detects if there is a loop device associated with a file determined by the device and inode numbers – or if creating a new loop device is necessary.

When an AppVM is stopped the xen hotplug script checks whether the device is still in use – if it is not, the script removes the snapshot and frees the loop device.

In order for the full potential of the snapshot device to be realized, every change in root.img must save the original version of the modified block in root-cow.img. This is achieved by a snapshot-origin device.

When TemplateVM is started, it receives the snapshot-origin device connected as a root device (in read-write mode). Therefore, every change to this device is immediately saved in root.img – but remains invisible to the AppVM, which uses the snapshot.

There is possibility to rollback last template changes. Saved root-cow.img.old contains all changes made during last TemplateVM run. Rolling back changes is done by reverting this “binary patch”.

This is done using snapshot-merge device-mapper target (available from 2.6.34 kernel). It requires that no other snapshot device uses underlying block devices (root.img, root-cow.img via loop device). Because of this all AppVMs based on this template must be halted during this operation.

Root device is exposed to AppVM in read-only mode. AppVM can write only in:

volatile.img is divided into two partitions:

Inside of an AppVM, the root device is wrapped by the snapshot in the first partition of volatile.img. Therefore, the AppVM can write anything to its filesystem – however, such changes will be discarded after a restart.

It is implemented just like TemplateVM (has own root.img connected as R/W device), but no other VMs can be based on it.