How to use disposables

A disposable is a lightweight qube that can be created quickly and will self-destruct when closed. Disposables are usually created in order to host a single application, like a viewer, editor, or web browser.

From inside an app qube, choosing the Open in disposable option on a file will launch a disposable for just that file. Changes made to a file opened in a disposable are passed back to the originating VM. This means that you can safely work with untrusted files without risk of compromising your other VMs. Disposables can be launched either directly from dom0’s Start Menu or terminal window, or from within app qubes. While running, disposables will appear in Qubes VM Manager with the name disp####.

This diagram provides a general example of how disposables can be used to safely open untrusted links and attachments in disposables. See this article for more on why one would want to use a disposable.

At this time, disposables should not be relied upon to circumvent local forensics, as they do not run entirely in RAM. For details, see this thread.

When it is essential to avoid leaving any trace, consider using Tails.

You can set any app qube to have the ability to act as a disposable template with:

You can change this behaviour for individual VMs: in the Application Menu, open Qube Settings for the VM in question and go to the “Advanced” tab. Here you can edit the “Default disposable” setting to specify which disposable template will be used to launch disposables from that VM. This can also be changed from the command line with:

For example, anon-whonix has been set to use whonix-ws-dvm as its default_dispvm, instead of the system default. You can even set an app qube that has also been configured as a disposable template to use itself, so disposables launched from within the app qube/disposable template would inherit the same settings.

Important Notes: Some disposable templates will automatically create a menu item to launch a disposable, if you do not see an entry and want to add one please use the command:

To launch a disposable template from the command line, in dom0 please type the following:

Opening a file in a disposable via GUI

In an app qube’s file manager, right click on the file you wish to open in a disposable, then choose “View in disposable” or “Edit in disposable”. Wait a few seconds and the default application for this file type should appear displaying the file content. This app is running in its own dedicated VM – a disposable created for the purpose of viewing or editing this very file. Once you close the viewing application the whole disposable will be destroyed. If you have edited the file and saved the changes, the changed file will be saved back to the original app qube, overwriting the original. 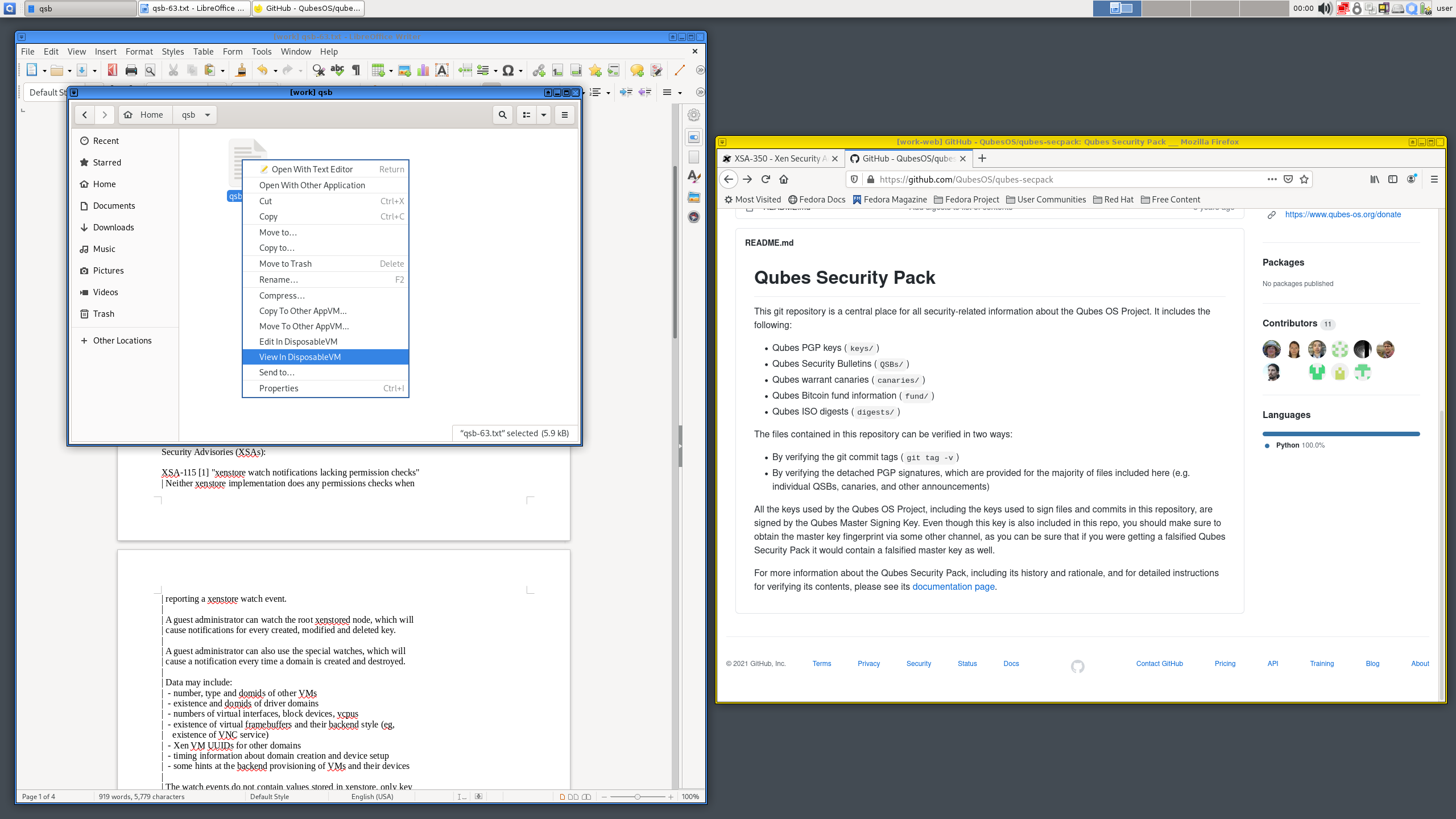 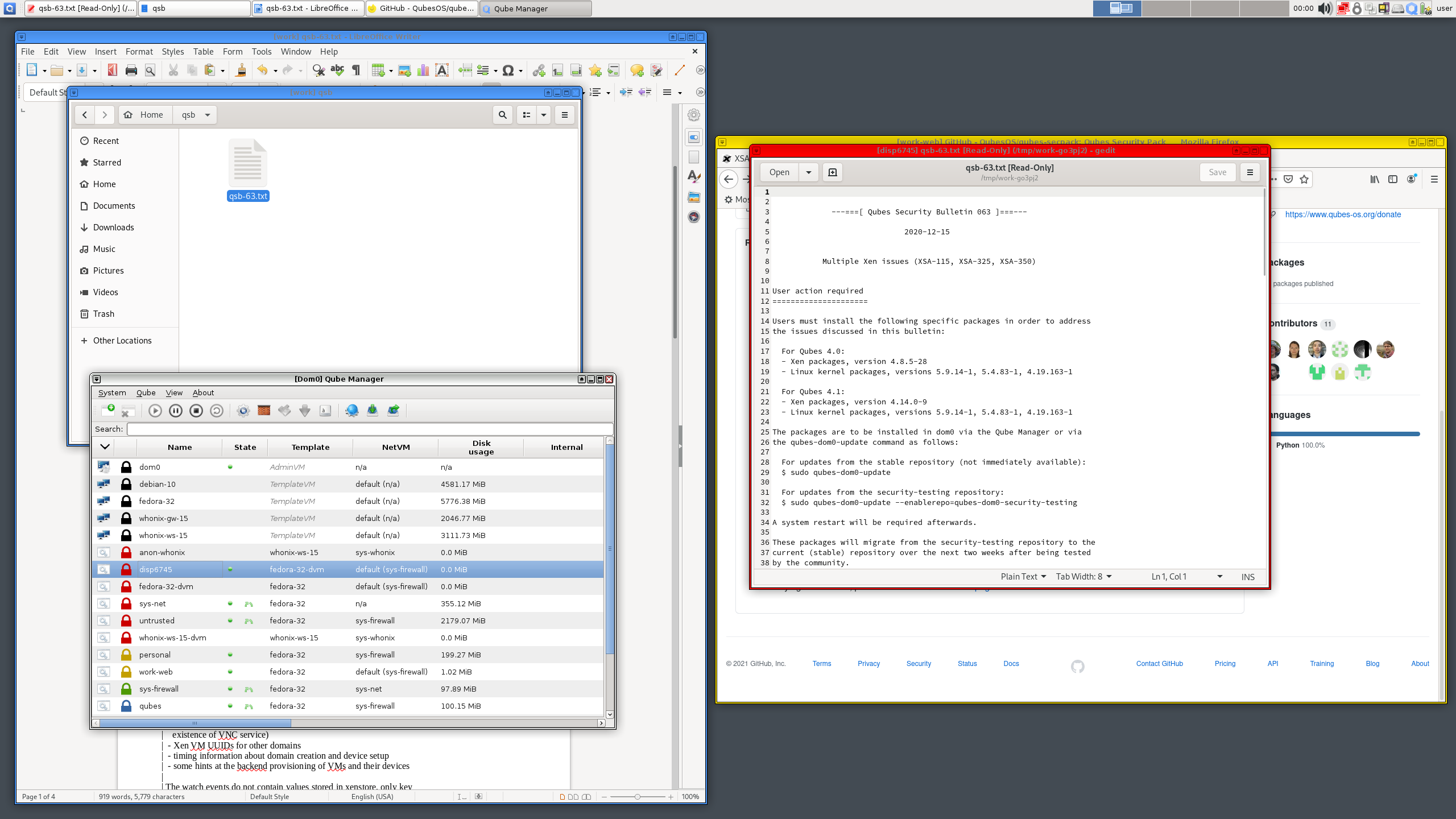 Opening a fresh web browser instance in a new disposable

Sometimes it is desirable to open an instance of Firefox within a new fresh disposable. This can be done easily using the Start Menu: just go to Application Menu -> Disposable -> Disposable:Firefox web browser. Wait a few seconds until a web browser starts. Once you close the viewing application the whole disposable will be destroyed. 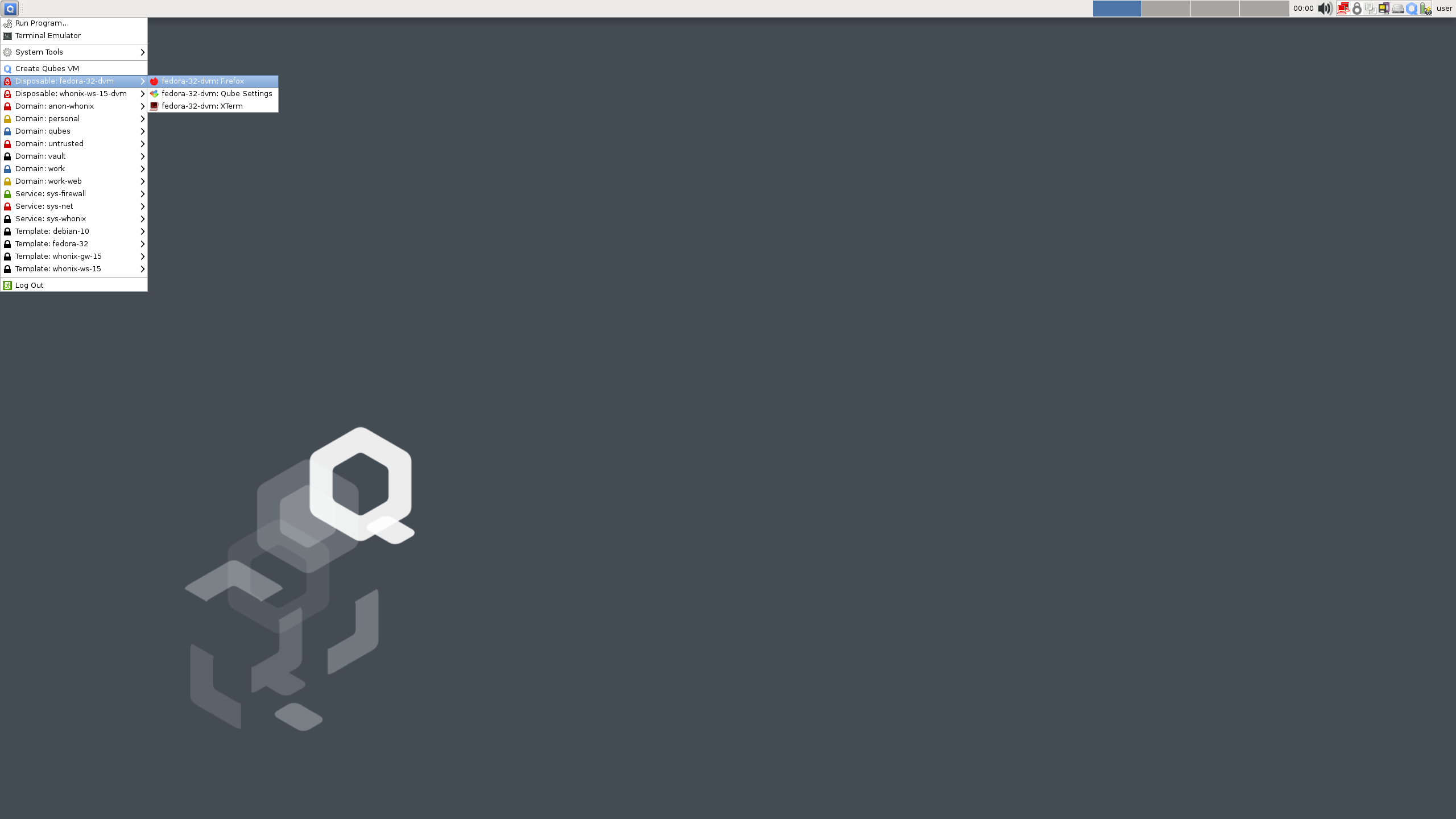 Use the qvm-open-in-dvm command from a terminal in your app qube:

Note that the qvm-open-in-dvm process will not exit until you close the application in the disposable.

Making a particular application open everything in a disposable

This feature is currently somewhat experimental, and only works for Linux qubes. It is known to work with Thunderbird and Wire, but it may fail to work with some applications that do not honor all XDG environment variables. If the feature does not work for you, please file a bug report.

Opening particular types of files in a disposable

This will not override the internal handling of PDF documents in Web browsers. This is typically okay, though: in-browser PDF viewers have a fairly good security record, especially when compared to non-browser PDF viewers. In particular, the attack surface of PDF viewing in Firefox is usually less than that of viewing an ordinary Web page.

Starting an arbitrary program in a disposable from an app qube

The created disposable can be accessed via other tools (such as qvm-copy-to-vm) using its disp#### name as shown in the Qubes Manager or qvm-ls.

The Application Launcher has shortcuts for opening a terminal and a web browser in dedicated disposables, since these are very common tasks. The disposable will stay running so long as the process which started the disposable has not exited. Some applications, such as GNOME Terminal, do not wait for the application to close before the process exits (details here). It is possible to start an arbitrary application in a disposable directly from dom0 by running:

The label color will be inherited from <DISPOSABLE_TEMPLATE>. (The disposable Application Launcher shortcut used for starting programs runs a very similar command to the one above.)

This will create a new disposable based on <ONLINE_DISPOSABLE_TEMPLATE>, open the default web browser in that disposable, and navigate to https://www.qubes-os.org.

Example of RPC policies to allow this behavior

In dom0, add the following line at the beginning of the file /etc/qubes-rpc/policy/qubes.OpenURL

In other words, any VM will be allowed to create a new disposable based on <ONLINE_DISPOSABLE_TEMPLATE> and open a URL inside of that disposable.

More information about RPC policies for disposables can be found here.

You can change the template used to generate the disposables, and change settings used in the disposable savefile. These changes will be reflected in every new disposable based on that template. Full instructions can be found here.